Is It Really Possible To Remove Tattoos With A Laser? 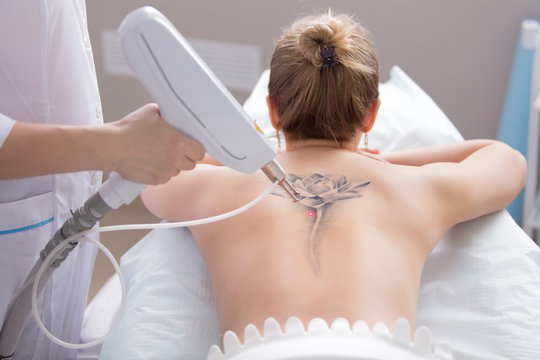 You may have heard laser tattoo removal recommended as a viable option for removing undesirable tattoos. Laser tattoo removal, on the other hand, seems like something out of a science fiction movie. Is it really possible to get rid of tattoos using lasers? Is this a therapy that genuinely works?

The first concern that everyone has regarding the possibility of utilizing lasers to erase undesired tattoos is whether or not the treatment works. In a nutshell, laser tattoo removal is the safest and most efficient approach for removing old ink currently accessible. It's a reasonably noninvasive therapy since it only employs lasers to target the ink of your undesirable tattoo, leaving the surrounding skin unharmed.

When it comes to tattoo removal, how effective are lasers?

To fully comprehend how lasers are used to remove those unsightly tattoos from a past life, we must first define a tattoo and discuss how it leaves a permanent impression on the skin.

Tattooing has been documented in human societies for thousands of years, according to archeological data. While techniques have evolved to include high-tech electronic instruments, the core of tattooing has remained essentially unchanged: using a needle or other device to permanently implant coloring into the skin.

Rather than a syringe, it looks more like a fountain pen

While many people imagine a contemporary tattoo artist injecting tattoo pigments into the skin with something like a needle and syringe, a tattoo needle is really more comparable to a fountain pen. The tattoo artist dips the tattoo needle's tip in ink, which dangles from the tip while the needle pierces the epidermis and dermis layers of the skin. The ink is then sucked up by your skin via a physical process known as capillary action.

The ink is then permanently held in place by the body's immunological reaction. The ink is held in place by white blood cells that rush to protect the body from the needle hole. Tattoos don't only trigger a white blood cell reaction when they're first applied, according to new research. In reality, the immunological response of the body is continuous, with new immune cells constantly appearing to defend the body while also assisting to keep the ink in place.

Pigmentation is dispersed by lasers

So, how can lasers get rid of tattoos you don't want? To begin, a custom-designed laser is used to target the ink while leaving the skin unaffected. The laser enters the skin as it passes over the tattoo, locating and shattering the pigmentation inside the tattoo. The laser has no impact on the skin around it during this time.

The laser, on the other hand, is able to break up the pigmentation into tiny enough particles that the lymphatic system, which is part of the body's immune system, can naturally drain them away. The lymphatic system may be thought of as the body's drainage system, since it assists in the removal of toxins, excess fluids, and other potentially hazardous substances. The body's natural systems for eliminating foreign materials are activated when a laser is used to erase undesirable tattoos.

Laser tattoo removal not only relies on the body's natural mechanisms to help erase the ink, but it also kickstarts the process with a highly focused beam of light that has no impact on the surrounding skin. The tattoo will fade away when the body flushes out the ink particles that were broken up by the laser.

The laser concentrates on the ink while ignoring the skin

One of the reasons why laser tattoo removal is the safest option is that it simply uses a focused beam of light that has a dramatic impact on the ink particles implanted in the skin while having no effect on the skin itself. When compared to other procedures for attempting to remove a tattoo, this makes it a very benign procedure.

While ink absorbs light–and so energy–at the laser's spectrum, the skin does not, leaving it fully untouched even as the tattoo is erased, with the leftovers naturally washed away by the body's processes.

There aren't any needles or knives in this recipe; it's all about the light

A laser therapy, as the name implies, uses focused light to treat a patient without the need of needles, blades, or other similar instruments. We just use a bright laser to break the particles of your undesirable ink. While this technique is not visible to the human eye, the effects will be noticeable as your tattoo fades away with each session.

Is it safe to use on a tattoo?

The efficacy of utilizing a laser to erase a tattoo, like any other cosmetic therapy, may vary depending on the conditions. Tattoos of all pigmentations and sizes may, however, be erased using a laser with the correct treatment plan. Certain hues or thick tattoos, for example, may need many sessions, yet effects will be noticeable from the first treatment, with the undesirable tattoo gradually fading away after only one visit.

What colors are removed with laser tattoo removal?

The laser has a distinct effect on various pigmentations since it is basically a very highly focused beam of light. Brighter pigmentations reflect more laser light, making the laser less efficient at breaking up ink containing such pigmentations. These hues are fluorescent and absorb very little light at the wavelength of the laser.

This isn't to say that a laser can't be used to erase tattoos in these colors; it only means that, in comparison to other pigmentations, these colors may need extra treatments.

Colors that are darker are more easily broken apart

Similarly to how fluorescent colors reflect more laser light, reducing its effectiveness at breaking up ink particles in those hues, darker colors absorb more laser light–and thus more of its energy–allowing it to more powerfully shatter apart those ink particles to a size that the body can then flush away naturally.

What is the average number of sessions?

There is no one-size-fits-all response to the issue of how many laser treatments it will take for your tattoo to totally vanish due to the diversity in tattoos, including the colors and density. After only one treatment, any tattoo will start to fade.

It will likely take fewer sessions for people who have tattoos with darker pigmentations than those who have tattoos with brilliant colours. This is due to the fact that darker pigments absorb more energy from the laser, making them more vulnerable to the laser's damaging effects, as mentioned above. Fluorescent hues, on the other hand, absorb less light and reflect it back, making it more difficult to break them down.

Your now-unwanted tattoo didn't emerge out of nowhere, and neither will its removal. Some tattoos need numerous treatments and patience to remove, but be assured that utilizing a laser is the safest, least intrusive, and most successful approach to finally get rid of that unsightly ink.

Are you sick of picking your clothes depending on whether or not you want to show off that awful tattoo you got years ago? A laser treatment can be the best alternative for you if you are absolutely committed to getting rid of that undesirable ink.

What should I do first?

What happens once you've determined that removing your undesired tattoo with laser therapy is the best option for you? It's important to choose a dependable, competent partner who can help you get the most out of your therapies.

When it comes to removing a tattoo, you want it done correctly. After all, the goal is to make it appear as if the tattoo never existed. That's why you should choose people that have the training, expertise, and enthusiasm to accomplish the best job for you.

There isn't much you can do to prepare for a laser tattoo removal procedure other than make the commitment to do whatever it takes to get rid of that nagging tattoo once and for all. You may discover that removing your tattoo is a far more pleasant experience than having it since it is a safe, generally noninvasive method that just targets the ink particles and ignores your skin.

You might be a good candidate for laser tattoo removal

If you're as dedicated to getting rid of that old tattoo as you were to obtaining it, laser tattoo removal may be the best choice for you. Laser treatments employ the power of focused light to shatter undesirable ink particles into tiny enough sizes for the body to flush them away naturally. They've been shown to be safe and effective over years of usage.

There's no longer any need to live with the remorse and disgrace of an undesired tattoo. Stop hiding behind your swimwear or pretending to laugh at the same humiliating tale every time you put it on. We all make mistakes in life that we later come to regret; however, some of those mistakes are more permanent–and visible–than others. If the error is a tattoo that you don't want, laser therapy may help.

If you're tired of shuddering every time you remember that embarrassing old tattoo from a previous life; if you're tired of trying to laugh off that same story of regret you wish you could just forget; if you no longer want that permanent reminder of the past, then contact laser tattoo removal in Battery Park City NY, and they'll get you started on the path to a new you!